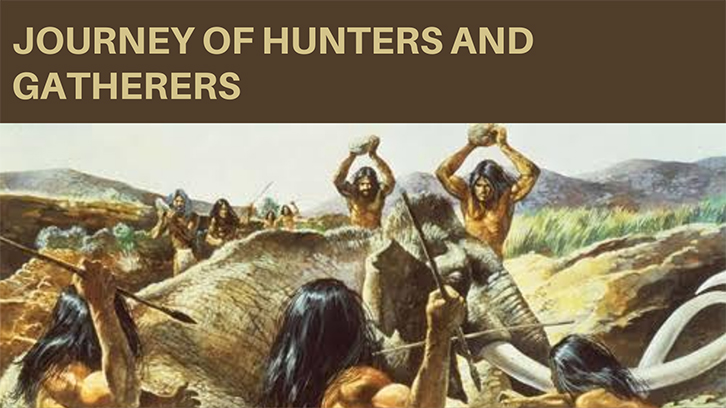 Human societies have lived as hunter-gatherers for about 99% of their existence. The way they acquired their food influenced their relationship with nature and formation of groups. There are various areas in the world where human beings still live as hunter-gatherers.

Faunal study provides information about the pattern of pre-historic faunal exploitation. Rock carvings & paintings also give an idea about economy and society of hunter -gatherer .Archaeologists use terms like Palaeolithic, Mesolithic &Neolithic to classify culture of different periods.

Palaeolithic culture developed in the Pleistocene period (about two million years ago).It is a geological period referring to the last or the Great Ice Age when ice covered the earth’s surface. Palaeolithic period is divided into Lower, Middle and Upper Palaeolithic based on climatic conditions and tools used.

Lower Palaeolithic Tools include mainly hand-axes, cleavers, choppers, and chopping tools. During Lower Palaeolithic phase one tool was produced from one stone and this process was cumbersome and therefore highly unproductive

But tool making process has been improved in middle Palaeolithic phase where cores are cut from larger stones and from each core many tools were cut as FLAKES or noodles.  A desired crude shaped tool produced by applying force on stone; flake carries positive bulb of percussion ( Convex)on its surface &core has a corresponding negative bulb (Concave) of percussion.

There are many flaking techniques including 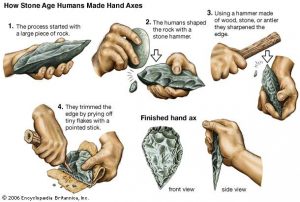 During Lower Palaeolithic phase   hand-axes, cleavers, choppers, and chopping tools have been developed

Handaxe- Its butt end is broader and the working end is narrower. It might have been used for cutting and digging purposes. 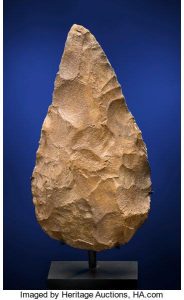 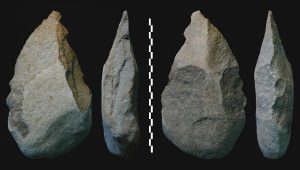 Chopper: A massive core tool in which the working edge is prepared by uni-facial flanking

Chopping Tool: Like chopper but working edge is bi-facially prepared by alternate flanking. Used as the chopper, it was more effective due to its edge being sharper. 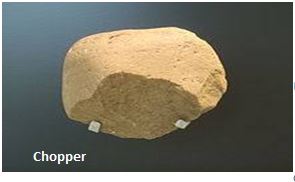 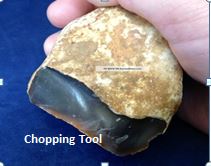 This has a bi-face edge and is more or less transversal. It was used for clearing and splitting objects such as the trunks of trees. Hand axe has a more pointed tip, while a cleaver will have a more transverse “bit” that consists of an untrimmed portion of the edge oriented perpendicular to the long axis of the tool. 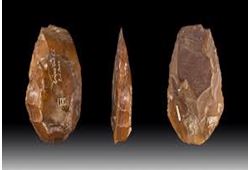 Burin: It is like flake or blade and the working border is produced by the meeting of two planes. The burin’s working border does not exceed 2-3 cm. in length. It was used for engraving on soft stones, bones or walls of rock shelters and cores.

Side Scraper: It is made of a flake or blade with continuous retouch along a border. It might have been used for scraping barks of trees and animal skins. 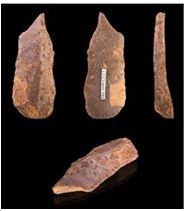 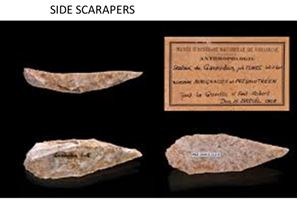 There has been a rich assemblage of animals both of indigenous and foreign origin. The wave of migration of most of the immigrant animals was along the north-west borders.

Balance between number of human and the animal population have been maintained. People would have made extensive use of faunal and floral resources in immediate vicinity. Large and middle sized mammal were hunted especially – ungulates- animals with hooves

Rock paintings and carvings also give us an insight into subsistence-pattern. Bhimbetka, in M.P, is known for continuous succession of paintings of different phases of Stone Age

Mesolithic age, began c.8000 BCE, was a transitional phase between Palaeolithic & Neolithic.Rise in temperature and warm & dry climate affected subsistence by changes in fauna and flora. The technology of producing tools also underwent change and small stone tools were used.Man was predominantly in hunting-gathering; hunting shifted from big –medium animals to small medium animals and to fishing and fowling (birds)

In Mesolithic phase tools were made using certain quartz material, called as Flints which is a type of microcrystalline quartz in the chert family. It is hard and durable and it is hit it breaks into uniform flakes with a very sharp edge in predictable and controllable manner. Other kinds of rock would just shatter or splinter, making them impossible to craft into a useable tool. The process of making tools out of Flint is known as FLINT KNAPPING. 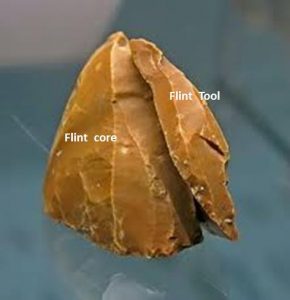 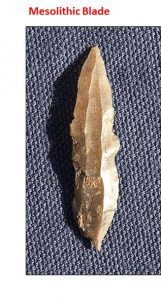 Blade: Blade is a specialized flake with parallel to sub-parallel to lateral edge, its length at least twice its width. It might have been used for cutting purposes. The technique of Mesolithic blade production is called fluting. Here, the pressure is delivered on the core from the edge of the striking platform. There are retouched blades which are broad, thick and long. The retouching process sharpens the blade; blades were retouched along one or two borders.

Core: Core is usually cylindrical in shape with fluting marks along its length and a flat striking platform at the distal horizontal end. A core is the stone from which one or more flakes have been removed; this is knapping process

Point: Point is a broken blade in a triangular form. It is retouched along one or both slopping borders and the border can be rectilinear or curvilinear. Points were used as arrow-heads and spearheads. 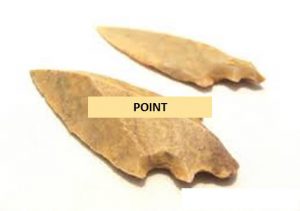 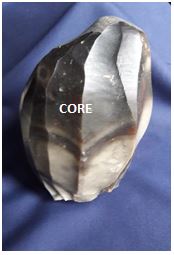 Triangle: It has usually one border and base, and the border is retouched. These were used for cutting purposes or as arrow heads. Lunate: It is like a blade and one of the borders is prepared by semi-circular retouching. It looks like a segment of a circle. Two halves cut back to back to form an arrowhead 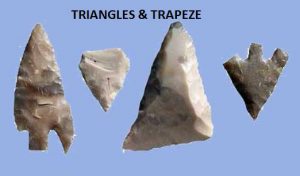 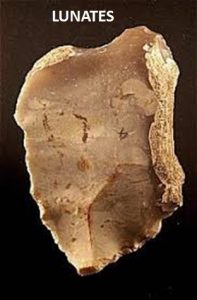 The domestication of plants and animals led to Emergence of village communities based on sedentary life, beginnings of agriculture technology, and greater control over nature by exploitation of natural resources. Therefore Life of Neolithic community was more stable. Neolithic culture marks beginning of a modern man.

Early Farmers in the world

Neolithic Tools were have  ground sharp cutting edges and have polished surfaces which were not cutting surfaces. 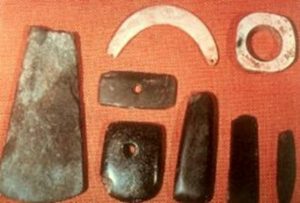 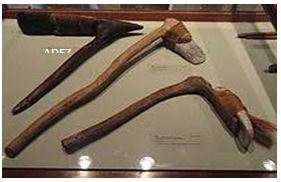 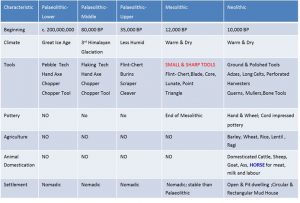