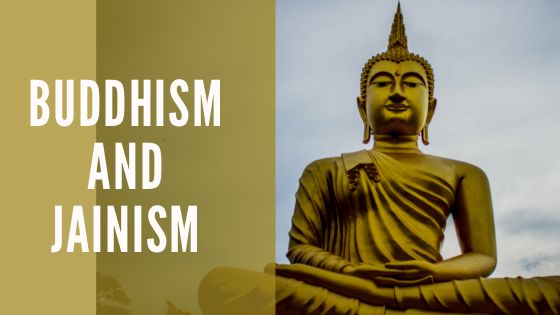 Buddhism and Jainism have emerged in the same region, approximately in the same period and patronized by kings in the same region. It will be interesting to study the emergence and development of both Buddha and Jaina religions .6th century BCE witnessed a growing opposition to ritualistic orthodox ideas of Brahmanas. This resulted in emergence of developed religions of Buddhism and Jainism & heterodox ideas.As causes for emergence of two religions are common and hence many of their principles are similar.

THE RISE OF NEW RELIGIOUS IDEAS

Vedic religious practices were cumbersome and glorified meaningless ceremonies. Also sacrifices and rituals increased and became more elaborate and expensive. Due to Varna system many sects prohibited from following the religious rituals. Growing importance of sacrifices and rituals established the domination of Brahmanas. Therefore Powerful rulers, rich merchants rejected the social positions defined for them by Varna as Buddhism and Jainism rejected Varna and hence attracted Vaishyas and Kshatriyas

TEACHINGS OF THE BUDDHA

Buddhism laid great emphasis on law of karma -the present is determined by past actions and the condition of man in this life and the next depends upon his own actions.We are born again &again to reap fruits of our karma. An individual who has no sins in this will not born again. Thus, the doctrine of karma is an essential part of the Buddha’s teachings.

He preached nirvana which means the shedding of all desires and ending of sufferings. Nirvana  finally leads to freedom from rebirth. Prayers and sacrifices will not end desire and hence will not help in attaining the Nirvana

Unlike Vedic religion he laid emphasis on moral life of an individual. Neither he accepted nor rejected existence of god. Buddhism also did not believe in the existence of soul. Also He emphasized on the spirit of love. Love all living beings by following ahimsa (non-killing) . Also Buddha preached that both severe asceticism as well as luxurious life should be avoided.

4th Council was organised during reign of Kanishka in Kashmir was attended largely by Hinayanists of north India. It compiled 3 commentaries (Vibhashas) of 3 Pitakas. It decided certain controversial questions of differences between the Sarvastivada teachers of Kashmir & Gandhara

Parshvanatha ,23rd Tirthankara of Jaina advocated four principles-Truth,Non-violence,Non-possession,Not to receive anything which was not voluntarily given.

Mahavira , 24th Tirthankara has added celibacy (brahmacharya).He believed that soul (jiva) and matter (ajiva) are two basic existing elements;Soul is in a state of bondage created by desire accumulated through previous births.Soul can be relieved of bondage and final liberation of soul (moksha) becomes “the pure soul”.Man is creator of his own destiny and could attain moksha by pursuing a life of purity, virtue and renunciation; Moksha (nirvana) can be attained by observing three principles (ratnatraya): Right belief, Right knowledge, and Right action.He advocated a life of severe asceticism & extreme penance to attain nirvana; He believed world was not created by any supreme creator; eternal law of decay development.He thought that all objects had a soul and believed that they feel pain or influence of injury. He rejected authority of Vedas and objected to Vedic rituals and supremacy of Brahmanas .A code of conduct was prescribed both for the householders and monks.

A householder had to observe the following five vows to avoid EVIL KARMA –Non-injury,Non –stealing, Non-adultery,Speaking the truth,and Non-possession.

He also preached that a householder should feed cooked food to the needy every day.Lay worshippers should not take to agriculture, as it destructs plants and insects.Monks had to abandon all worldly possessions, walk such that not to kill or injure any being . He had to train himself so as not to be affected by objects of the senses.

Jainism believed monastic life was essential to attain salvation. Original doctrines taught by Mahavira were contained in 14 old texts known as the Purvas.

Mahavira had 11 disciples known as Ganadharas (heads of schools). Arya Sudharma was the only Ganadhara who survived Mahavira and became the 1st Thera (chief preacher).Jaina order in the days of late Nanda king was administered by two Theras namely a) Sambhutavijaya  and b) Bhadrabahu – contemporary of Chandragupta Maurya Mahavira’s followers slowly spread and received royal patronage of Udayin, the successor of Ajatashatru and Chandragupta Maurya .During early centuries of CE Mathura and Ujjain became great centres of Jainism

patronage extended by the kings helped Jainism to gain a prominent place.