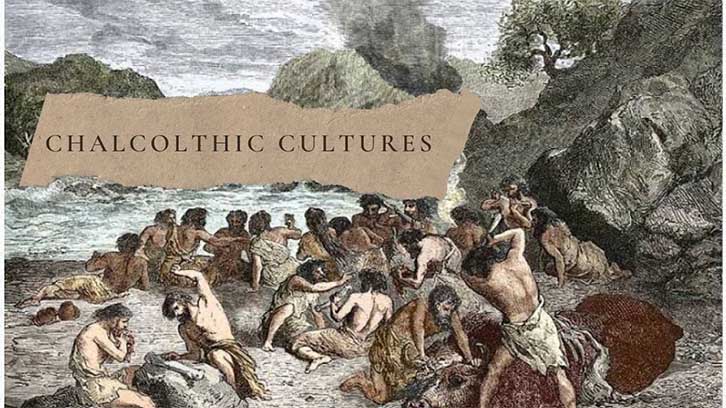 Chalcolithic culture or copper age culture is another important phase of prehistoric development of human society in India. This cultural phase was characterised by use of copper tools, weapons and copper potteries developed by several regional rural settlements. Interestingly copper age was sandwiched between Neolithic and Iron age in Indian sub-continent. Therefore in Gangetic plains it has overlapped with Iron age and overlapped with Neolithic age in South India. Chalcolithic culture had laid a strong foundation for formation of tribal kingdoms in different regions of Indian Sub-continent.

Kayastha pottery was characterized by three fabrics-a thick and sturdy red slipped ware painted with designs in dark brown, a thin red painted buff with fine fabric and a combed ware having incised patterns, and generally without a slip. Most pots are sturdy red slipped ware with a ring base similar to pre-Harappan.Sothi culture (in Rajasthan) is pottery that is akin to the pre-Harappan pottery of Kalibangan. Ahar pottery has seven types of wares but Black-and-Red Ware painted in white is well known. Savalda culture is marked by Black on-Red Painted pottery with birds, animals & fishes decor .Malwa ware is coarse in fabric having a thick buff slip; patterns are in black or dark brown. Prabhas and Rangpur wares are both derived from Harappan Black-on-Red painted ware, but since the latter has a gloss, it is referred to as lustrous Red Ware. Jorwe

Ware is painted Black-on-Red, and has a matt surface treated with a red wash. All these cultures have also red or grey and Pottery    was both wheel-made and hand-made. Usual shapes which are :bowls, basins, globular jars with concave necks, dishes, lotas .A distinctive feature of Malwa pottery is small goblets on solid pedestals.Jorwe culture had carinated (a joint of two surfaces) bowls, spouted( long neck)  jars with flaring mouths &high-necked globular vases.

A greater part of region has black cotton soil. It is semi-arid and the rainfall varies between 40-100 cm. Economy was subsistence agriculture, animal rearing and dependent on wild animals & fish. Cultivated Crops- Carbonized remains of seeds indicate that a variety of crops were raised like Barley, wheat,rice,bajra, jowar,lentil, horsegram, haycinth bean, grass pea, pea, black gram, green gram. Other plants were Jaamun, Behada, wild date, ber, Myrobalan.Barley was principal cereal during this period. Evidence from Inamgaon suggests practice of crop rotation, harvesting of summer and winter crops, and artificial irrigation; A massive embankment (240m x2.40 m) was built during (c.1400-1000 BCE) to divert flood water through a channel (200 mx4mx 3.5 m).An ard (prototype of ploughshare) made from shoulder bone of cattle at Walki, Inamgaon suggests that black cotton soil was ploughed for farming operations

Animals: Excavations have revealed evidences of both domesticated and wild animals. Domesticated animals   were cattle, sheep, goat, dog, pig, horse. Bones of cattle and sheep/goat were found at most of the sites. Cut &chop marks on bones indicate that young animals (3-36 months old) were slaughtered for food. Wild species like black buck, four-horned antilope, Nilgai, Barasingha, Sambar, Chital, wild buffalo,one-horned rhinoceros are found. Bones of fish, waterfowl, turtle and rodents. Bones of sea fish were found at Inamgaon; they were cooked in open.

In Malwa settlements at Inamgaon, majority of exposed houses were aligned in a roughly east-west orientation. The houses were built close to each other but had a space of about 1-2m served as lane. At Inamgaon the houses were large (7m × 5m) rectangular structures with a partition wall. Houses had a low mud wall, gabled roof, and a large oval fire-pit with raised sides.Navadatoli houses had 1 or 2 mouthed chullahs in kitchen. Grain was stored in pit silos (1m dia & 1m deep).Wicker bins having grains were placed in circular mud platform (1.5m dia). At Inamgaon smaller houses of the artisans such as potter, goldsmith, lapidary, and ivory-carver were located on western periphery whereas larger houses of well-to-do farmers were in central part. Location and size of the houses demonstrate social differentiation.

Eran and Nagda (Malwa culture) and Inamgaon (Jorwe period) houses have a fortified mud wall with stone rubble bastions and ditch around the habitation.Jorwe culture had large centres like Prakash – Tapti, Daimabad in Godavari valley and, Inamgaon-Bhima river.In early Jorwe (c.1400-1000 BCE) phase at Inamgaon houses were large rectangular structures with low mud walls (about 30 cm. thick) surrounded by wattle-and-daub constructions. These houses were laid out in rows with their longer axis in a roughly east-west orientation. They have an open space in between (approximately 1.5m wide) which might have served as a road or lane. Later Jorwe houses, due to poverty, were small round huts in clusters of three or four. The pit silos were replaced by a four -legged storage jar supported on four flat stones. The poverty was caused by decline in agriculture as a result of drop in rainfall which was due to a drastic climatic change forcing people to resort to a seminomadic existence. This conclusion is based on calculations of percentages of animal bones found in different phases. Therefore increasing aridity during Late Jorwe period led to decline of agriculture, and economy based on farming changed over to sheep/goat pastoralism.

The cultures are marked by stone blade/flake tools of chalcedony, chert, jasper, and agate. Tools included long parallel sided blades, blunted black blades, serrated blades, pen knives, lunates, triangles, and trapezes. Some blade-tools having shine on the sharp edge were used for harvesting. Copper objects consist of: flat axes or celts, arrowheads, spearheads, chisels, fish-hooks, mid-ribbed swords, blades, bangles, rings, and beads. At Kayastha one pot contained 28 copper bangles; another contained a steatite necklace made of 40,000 micro beads. Some objects, like axe, were cast in mould, while others were hammered to shape. Prolific ornaments are beads made of carnelian, jasper, chalcedony, agate, shell etc. At Inamgaon found beads of gold and ivory, a spiral ear-ring of gold and anklets of copper. Terracotta figurines of human & animal found; Stylized terracotta bulls (miniature sized) in Kayastha. Bull figurines, with hump, with horns twisted backward, with horns projecting forward horizontally are of interest; Numerous figurines suggest bull was a sacred animal & also toys.

Mother Goddess was worshipped based on finding of female figures of clay. The female figures are both with heads and without heads; At Nevada (c.1500 BCE) found a large headless female figure made without clearly showing physical features. Inamgaon has yielded similar terracotta female figurines which show no physical features. At Inamgaon a headless female figurine & a bull figurine were found in a receptacle of (c.1300 BCE). These figurines may represent goddess Sakambhari (of early historic period), the goddess of vegetative fertility who was worshipped for warding off draughts.  Male figurines are rare in Chalcolithic settlements. Figurines of clay found in late Jorwe levels (c.1000-700 BCE) at Inamgaon could be gods. A painted jar of Malwa period (c.1600 BCE) has two panels; In the upper panel depicts a human figure wearing a garment of twigs covering the loin, and is surrounded by stylized animals such as stag, deer, peacocks etc. and lower panel shows springing tigers or panthers; This vessel, richly decorated with elaborate paintings, might be used in rituals. Also cast copper elephant, buffalo, rhinoceros at Daimabad were of religious importance.

Adults & children were buried in north (head)-south (leg) orientation. Adults were buried in an extended position and children were buried either in single pot or, more often, in two pots – placed horizontally mouth-to-mouth in a pit. Adults, & also children, were buried in a pit dug into house floor and rarely in courtyard of the house. During Jorwe period, in case of adults, portion below ankle was purposely chopped off. These practices suggest a belief that dead were restrained from turning into evil ghosts. Adult burials, in several cases, contain offerings (grave goods) which are usually two or more number of pots. One adult burial of Late Jorwe period contained 15 pots. In an adult burial of Late Jorwe period, a large copper ornament was found on the skeleton. A child in twin urn-burial had a necklace having twelve beads of copper & red jasper. Jorwe period has also disclosed some unusual burials at Inamgaon. A 4 legged Urn contained skeleton of a male of about 30-40 years in a sitting posture; portion below ankles were not chopped off. Burial offerings were a spouted pot with painting of a boat design having long ears. Boat design reminds present day Hindu belief that departed soul has to cross waters in a ferry to reach heavenly abode; person who was given such an elaborate burial could be of high status, or ruling chief of settlement, or belonging to a social group that practiced a different kind of burial.

There were of two types of settlements- regional centres and village settlements suggest that some form of administrative organization was present in Chalcolithic cultures. Presence of an administrative authority is further supported by existence of public structures such as fortifications, rampart and moat, granaries, embankment and canals. Chalcolithic cultures do not support significant influences of Late Harappan culture; these cultures are marked by strong regional elements, and display trade links & cultural contacts between each other. These communities which flourished in 2nd millennium BCE disappeared around 1st millennium BCE due to increasing aridity and unfavourable climatic conditions( soil study).Many settlements in Godavari, Tapti and other valleys were deserted, and were reoccupied after a gap of five or six centuries in 5th-4th centuries BCE, heralded by urbanization .